I’m continuing my series of photo tutorials through the alphabet…

It’s pretty common knowledge that, if you select the ‘B’ setting on your camera (this will be either a mode option or a shutter speed option) the shutter will open when the button is pressed, and remain open until the same button is released. With the aid of good camera support such as a tripod, and a remote control device of some sort (so as to avoid jogging the camera) very interesting images can be obtained by keeping the shutter open for a long time – perhaps several minutes, at night!
I shall revisit this topic in more detail another time, but for now, I want to discuss how this designation leads us to a fascinating part of the history of photography, because that B stands for bulb.

Are we talking flowers, or lighting? Well, it’s the second one, but, as the saying goes, not as we know it. Not nowadays, anyway.

Very early in the histiory of photography, people realised that its scope could be increased by using artificial light, produced in some way or other. The sensitivity of early film was, in comparison with digital systems, or even modern film, abysmally poor, and so they were looking to produce a lot of light, even if only for a short time.

The first method that was developed was somewhat erratic in use, to say nothing of its inherent danger! You had to use a device that looked a bit like a very small version of a plasterer’s hawk, with a metal reflector shrouding three of the four sides. Built into the handle was a spring-loaded flint-and-steel system, which, when set off by a trigger button, sent up sparks onto the table part, as you might say. Now, in a small recess on this part, you put a measured dose of ‘flash powder’ – a mixture of magnesium powder and a powerful oxidising agent!

Remember seeing burning magnesium ribbon, in the chemistry lab? Now you can see how this worked, can’t you? When you pressed the trigger, the sparks ignited the magnesium, which burned very quickly, giving out its characteristic bright white light, which was reflected forwards. The reflector also protected the operator!

To take the photograph, you first opened the shutter in time-exposure mode (it wasn’t called ‘B’ yet) fired the flash system (you had to hold this level, of course) and then released the shutter. Flash photography was born, but now do see why I said it was dangerous?

The next development was the flashbulb (around the late 1920s.) Flashbulbs were similar to ordinary light bulbs, or as they are properly known, electric lamps, but the filament was surrounded by aluminium wool in an atmosphere of oxygen. Flash photography was now much more reliable, consistent, and safer (thanks to guarding the bulb, and later, giving the bulbs a safety coating (they always cracked.) Nor did flashbulbs make smoke and fumes, like flash powder did! The first ‘flashguns’ had a reflector, a guard, a bulbholder, and a simple battery circuit with a button switch to fire the bulb.

OK, so now, everything was a lot easier and safer to use, but the principle was the same: you opened the shutter, pressed the button on the gun, then closed the shutter. This has come to be termed the ‘open flash’ method. And this is how that shutter setting came to be called ‘bulb’!

Some time later came the next, very obvious, development, which, of course was to build an electrical switch into the shutter system, so that the flashbulb could be fired in synchronism with the operation of the shutter, at a fairly slow speed setting (say, 1/30th of a second.) This drastically simplified the procedure for taking flash pictures.

BUT… that term ‘bulb’ just stuck – for the operating mode where the shutter is open for as long as the release is held down!

Perhaps you’ll think about all this, next time you take a photo using electronic flash, or even LED flash on a smartphone. (by the way, electronic flash gradually started to make significant inroads into amateur photography from around 1970, although a xenon flash-tube was made as early as 1931.) For myself, I can only say that I have nothing but admiration and respect for all the pioneers of photography who have gone before us. 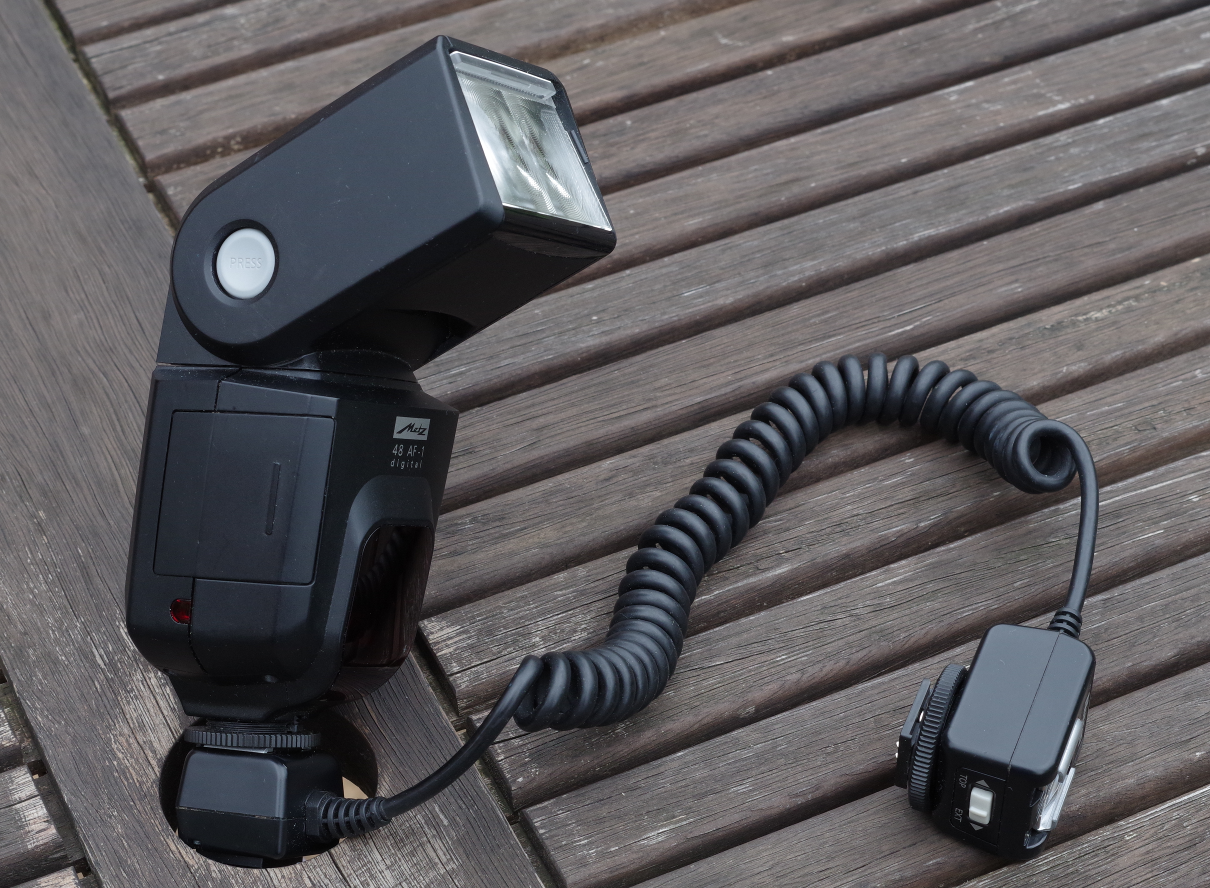 Here is a modern fully-featured electronic flashgun that I use. Flash has come a long way. (Oh, and yes, that is a garden table with an umbrella hole in it!)

Well now, that was going to be about all for now, but I’ll just deal with one practical issue. You’ll see that in the picture above, my flashgun has a cable fitted, so that it can be positioned away from the camera. This adds versatility, and in particular, helps to deal with the bugbear we all know as ‘red eye’ in pictures of people.
What happens is this: when strong light enters a person’s eye, it illuminates the back of the eye, where there are a great many tiny blood vessels. These are, of course, red! Now, if the source of light, i.e. the flashgun, and the camera lens are very close together, reflected red light will come back straight at the camera, because the flash-to-subject axis and the subject-to-camera axis are very nearly the same. Hence the eyes of the person in question will appear, in the image, to have red centres!
By far the best way to avoid this is to space the flashgun away from the camera, thus creating a significant angle between those two axes I mentioned. The problem goes away!

I hope all this is intelligible (and of interest.) As always, feedback is welcome, and much appreciated.